John Fredy Barrera, a professor and researcher at the UdeA Institute of Physics, has been chosen as one of the Future Leaders of the STS Forum 2016. The Science and Technology in Society Annual Meeting took place in Kyoto, Japan, October 1 - 4, 2016. Professor Barrera became the only Latin American contestant to be given this recognition. 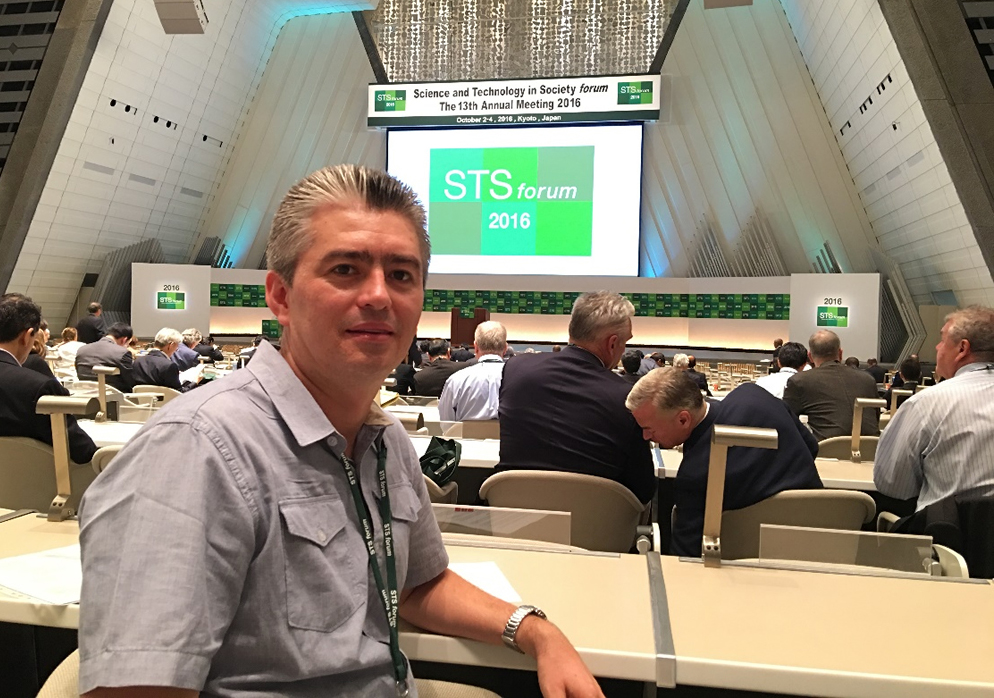 The Future Leaders Program aims to bring together promising young leaders from around the world in order to attend the STS Forum Annual Meeting. This year's STS Forum was attended by 1200 participants from 100 countries, including Nobel laureates, academics, policy makers, business leaders and journalists, among others.

The Future Leaders had the opportunity to meet and interact with Nobel laureates, visit Kyoto University and participate in discussions on key issues such as sustainable development, research and innovation, ICT, renewable energy, genome engineering, and healthy aging.

Professor Barrera, who is the coordinator of the Optics and Photonics research group at Universidad de Antioquia, has worked in a number of areas including optimal information processing, optical encryption methods, optical techniques for data encryption and security, diffractive optics, holography, interferometry, and visual optics.

Barrera says he is surprised to be the only Latin American recipient of the Future Leader 2016 recognition and the first Colombian to receive the distinction. 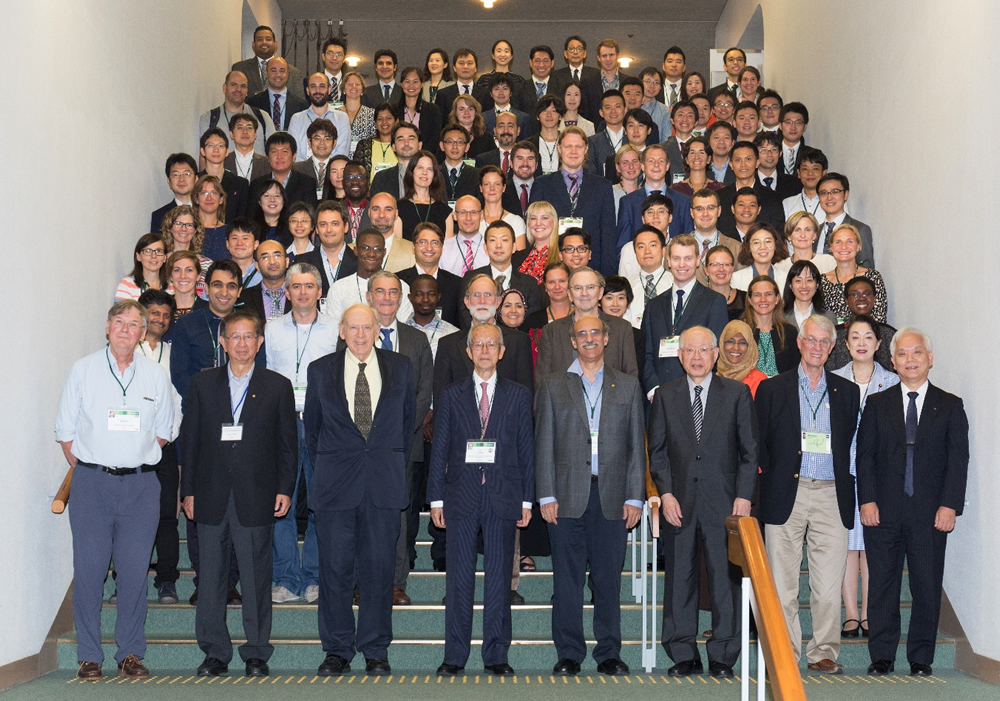 Photo: The Future Leaders 2016 meet with Nobel laureates and Koji Omi, founder and chairman of the STS Forum.

What does it mean to be picked as a Future Leader?

This is an international recognition of my career as well as an incentive to continue working despite the numerous obstacle to conduct basic science research in Colombia.

This recognition is very special to me for so many reasons. First, because I became the first Colombian to receive this important recognition and the only Latin American to be chosen as one of the Future Leaders 2016, and secondly, because I earned my undergraduate and graduate degrees from Universidad de Antioquia, which is quite meritorious as most Future Leaders come from prestigious international universities that boast outstanding research infrastructure and financial resources to develop their projects.

What does it feel like to be the only Latin American to be given this recognition?

This unexpected recognition of my career as a professor and researcher at Universidad de Antioquia is also a recognition of the outstanding research done in Colombia. I'm honored and humbled that several scientists and academics have congratulated me. They told me they were very pleased that a Colombian has been chosen as a Future Leader, and that more and more Colombians are holding key positions in the fields of science and technology in companies and laboratories around the world.

How the selection process works?

The recruitment process for the Future Leaders program is extremely competitive and rigorous. To be admitted into the program I should first be found eligible by the World Academy of Sciences. After being considered as eligible, I went through a second selection process conducted by the New York Academy of Sciences. Finally, I was able to successfully complete the final stage of the process which was carried out jointly by NYAS and JSPS.

What does it feel like to participate in the STS Forum?

Although I have attended several conferences, attending the STS Forum 2016 has been a rewarding and enriching experience for me. The STS Forum brings together some of the world's most renowned scientists, researchers, business leaders, policy makers, and journalists, among others, in order to offer a series of talks and discussions on hot topics in science and technology. Likewise, the roadmap that sets the direction for research in science and technology in the coming years, was revealed at the STS Forum 2016.

Prior to the start of the STS Forum, the Future Leaders had the opportunity to meet with Nobel laureates in order to discuss the role of science and technology in today's society. On the other hand, we had the opportunity to learn more about their research work, personal lives, and how winning the Nobel Prize changed their lives. We also had the chance to visit Kyoto University’s Institute for Virus Research.

What is your biggest learning from this experience?

The most gratifying and hopeful thing was to attend the speeches of the Prime Ministers of Japan and Slovenia, the Deputy Prime Minister of the Russian Federation and the Chairman of the Japan Business Federation at the the opening session, where they discussed the role of science and technology in helping boost a nation's development and the role of basic sciences in today's society.

Attending this world-class event strengthened my belief that developed countries have clear visions and strategies that will allow them to continue to be at the forefront of advances in science and technology. In contrast, developing countries such as Colombia, lack robust scientific systems as well as clear science and technology strategies, especially in the field of basic sciences.

What's next for you?

Such an important recognition has positively impacted my career since this distinction is given by world-renowned organizations that have extremely rigorous recruitment processes based mainly on the impact and quality of an individual's scientific research. This is not only an international recognition of my research in the basic science field but also an incentive to continue my work. It also encourages me to continue working with great enthusiasm despite the various challenges facing basic sciences.

John Fredy Barrera-Ramirez graduated from Universidad de Antioquia in 2001 with a bachelor's degree in Physics. He earned his Master's and PhD degrees in Physics from the same university in 2003 and 2007, respectively.

In 2015, Professor Barrera was appointed Senior Member of the Optical Society (OSA), a designation for “well-established individuals” that “recognizes their experience and professional accomplishments or service within their field that sets them apart from their peers".

Despite the fact that two other Colombian researchers have been appointed OSA Senior Members, this designation is of great importance since Professor Barrera, a researcher under the age of 40, is the only OSA member currently working in Colombia.

On the other hand, Professor Barrera became the first Colombian to be elected as an associate member of the World Academy of Sciences (TWAS) and as Young TWAS Affiliate. He is also a member of the International Centre for Theoretical Physics ICTP (ICTP Junior Associate) and has been included in a list of 30 Latin American scientists who are doing promising scientific research, which was published on www.latinAmericanScience.org in May 2014. Professor Barrera is also a member of the International Society for Optics and Photonics (SPIE).

He is also the recipient of the 2015 National Science Merit Award in the Outstanding Researcher category, a recognition bestowed by the Colombian Association for the Advancement of Science ACAC. In addition, he was awarded an Honorable Mention in the 2014 Alejandro Angel Escobar National Awards, as well as the Mayor’s Award for Excellence in Research, a distinction bestowed upon individuals who have conducted outstanding, high-impact scientific research. In 2015, Universidad de Antioquia awarded Professor Barrera the Francisco José de Caldas Medal for Excellence. Likewise, Barrera won second place in the 2014 UdeA Research Awards.