Symbologies of the Past of the Cartama Region

By: Natalia Piedrahita Tamayo-Journalist
Támesis is the municipality with the highest concentration of petroglyphs in Colombia. To date, more than 1,000 engravings on 120 rocks have been recorded in its villages and urban area. Researchers from the Faculty of Social and Human Sciences have inventoried and analyzed the markings of the human groups that inhabited this area near the Cartama River. 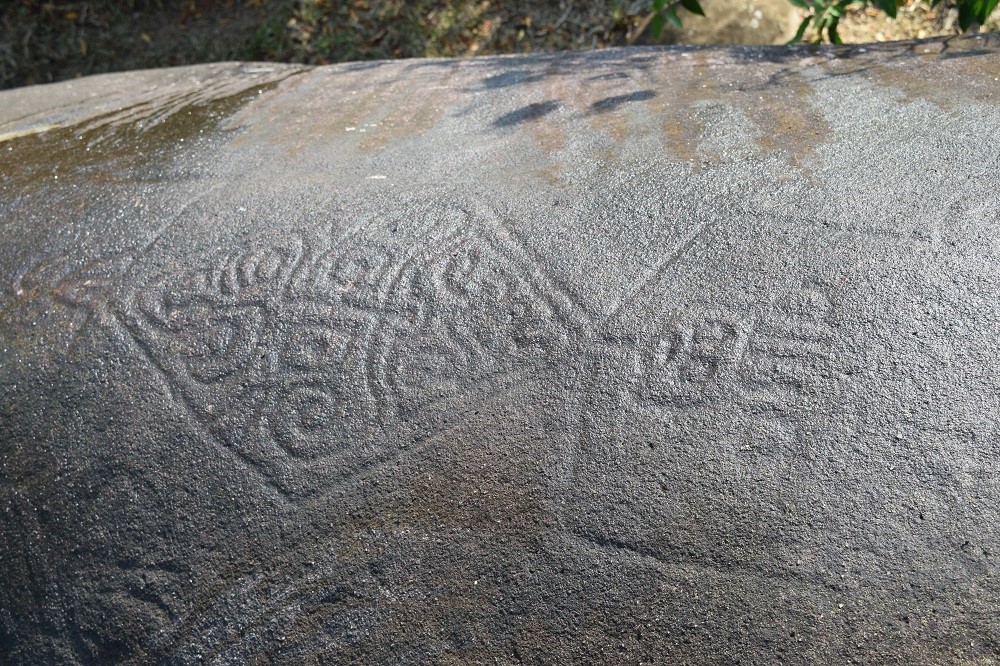 The ornaments on the head of the anthropomorphic figures refer to a high rank in the social organization. Photo: Alba Nelly Gómez García.

In the first months of 2022, 20 new engravings were found on rocks in the lower villages of the municipality of Támesis, the closest to the river. The discovery adds to the catalog of rock findings that Universidad de Antioquia anthropologists and archaeologists have carried out in southwestern Antioquia. This region is a window to the human groups that inhabited the area in pre-Columbian times.

It is not the only locality. Southwestern Antioquia has five archaeological concentrations: Fredonia, Titiribí, Venecia, Jericó and Támesis. In these municipalities, roads, caves, cemeteries, shaft tombs with lateral chambers, funerary rock shelters and other vestiges have been found. They show the activities carried out by the ancestors of the people who inhabit these areas. Next to the Cartama River —a branch of the Cauca River— right in Támesis, there are numerous petroglyphs.

The word "petroglyph", of Greek origin, is composed of the particles pétra (rock) and glyphos (carved). It names the representations made by incisions on rocks. "Within rock art, there are paintings and engravings on rocks. When it is said that they are ‘rupestrian’ expressions, it means that they are made on a rock. What we have studied shows us that they used a harder rock to carve on another rock in low relief and made a channel in the surface", explained Alba Nelly Gómez García, anthropologist and researcher at the Faculty of Social and Human Sciences of Universidad de Antioquia. She is the author of several studies and inventories of petroglyphs in Antioquia.

In 2004, Gómez García began to study the funerary structures of the pre-Hispanic groups that inhabited the region where the municipality of Jericó is located today. After that experience, she delved into other sites such as Tarso, Valparaíso, Caramanta and Támesis. The last one has been her research headquarters since she discovered the number of pieces in the form of petroglyphs.

So far, the records that have been analyzed in Támesis show that these symbolic inscriptions were made between the 2nd and 5th centuries AD. Most of the findings have been rocks from the villages El Rayo, El Encanto, San Luis, El Hacha and Otrabanda. They are between abstract and realistic representations of spiral, geometric, anthropomorphic, zoomorphic and anthropozoomorphic figures. In all cases, they are traces that reveal forms of space appropriation, although their use and function are still unknown to researchers.

The collection of information was based on data sheets that detail the context, georeferencing, description and drawings of the figures found on the rocks. They also logged interviews with key actors —inhabitants of the sites where the findings take place and researchers on the subject— and cultural managers of the municipality, as well as photographic records and field diaries.

"The first thing was the inventory and distribution. Their existence there is not accidental. It has to do with the layout of the landscape and their relationship with it. We have to analyze them in conjunction with mobility routes, burial sites, habitation sites and the use of water by the groups that inhabited the region. They are not isolated events. It is also essential to analyze the context and the environment in which they were conceived and drawn", said Gómez García.

Petroglyph researchers have used different tools and methodologies for their analysis and recording. In the past, they were painted with chalk and then traced. They also used water since humidity makes the depths of the rock stand out. At present, they use flashlights or moonlight since it is easier to see petroglyphs at night. The beams reflect the grooves.

The location of the petroglyphs and their representations can signal paths or routes that ancestors traced and were important for their direction or arrival at different points of their geography. "For the indigenous people, each place has its function or time. There is a time for sowing, for gratitude for the harvest, to spend the night, to see the sunset, for a ceremony", highlighted Pablo Arbeláez, archaeologist, environmental engineer and petroglyph researcher.

Archaeologist Graciliano Arcila Vélez (1912-2013) was the first researcher to study the petroglyphs of Antioquia. In addition to founding the Ethnological Society of Antioquia, the Department of Anthropology and the University Museum of Universidad de Antioquia, he excelled as a professor in areas of ethnography and dedicated much of his academic life to the analysis of pre-Hispanic material culture. One of his discoveries was the rock Pirú, located in the village El Rayo, in Támesis, on which more than 50 geometric, zoomorphic, anthropomorphic and anthropozoomorphic figures can be seen.

Badges of the Ordinary and the Extraordinary 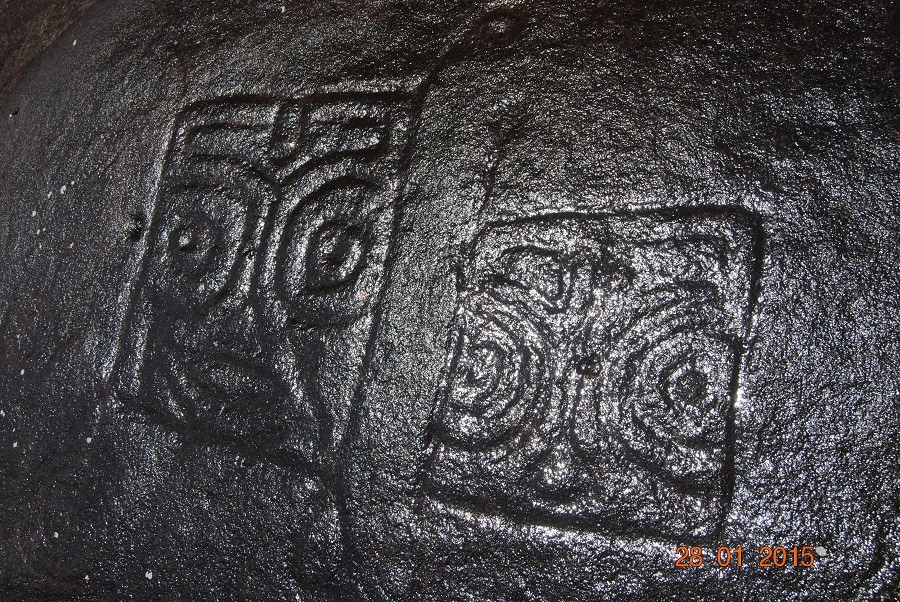 Geometric patterns are repeated in petroglyphs of the villages El Rayo, El Encanto and Otrabanda in the municipality of Támesis. Photo: Alba Nelly Gómez García.

In her iconographic study of rock paintings in the municipality of Támesis, Antioquia, anthropologist Ángela María Velásquez Castro explained that, according to the accounts of the Spanish chronicler Fray Pedro Simón, "the indigenous people of this area were Catíos, Cartamas, Caramantas and Ansermas. These groups showed their hierarchical position in their dwellings, ornaments and grave goods. The findings in their tombs allow us to deduce that they believed in the possibility of communicating with gods and life after death".

In a dialogue with Alma Mater, Velásquez Castro explained that we can talk about a "great Cartama culture" that inhabited the area approximately 1800 years ago. There are representative patterns on the rocks that are repeated in different locations: the icon of the devil —also known as ‘the gown’ because of its appearance— spirals and zoomorphic figures.

"These are key details in the Támesis representations. Some researchers believe that these signal processes and rituals of motherhood and childbirth. There are several of these on the Pirú rock, and they may also symbolize a celebration of life. From my perspective, they are, above all, elements that make it possible to organize the territory according to its characteristics", said Gómez García.

In the House of Culture of Támesis is the Cartama Archaeological Museum, where some vestiges of rock art found in the area are gathered. One of the most common anthropomorphic figures among the ones recognized is associated with the representation of the healer or shaman. "Some have crowns on their heads or feathers or leaves on their limbs. They are represented in various traces on rocks and are also seen in figures in paintings and gold and silver work. A review of the literature on pre-Columbian representations shows that it is a figure related to rituals and the connection with an afterlife", concluded Velásquez Castro.

Through the Colombian Institute of Anthropology, researchers register new paintings or engravings that are found in the country. So far, the registry with the highest concentration is Támesis. However, many petroglyphs have been observed in other places such as El Colegio, municipality of Cundinamarca, but their concentration is lower.