Gorgona, a Haven of Life for Hawksbill Turtles

Since 1977, the capture and marketing of hawksbill turtles, a highly endangered species, has been prohibited in Colombia. Their shell has been coveted by traders and consumers for its beauty, which has put this marine species in an ordeal. Researchers from Universidad de Antioquia conducted one of the most complete studies of these animals. It yielded relevant data on their growth and conservation. 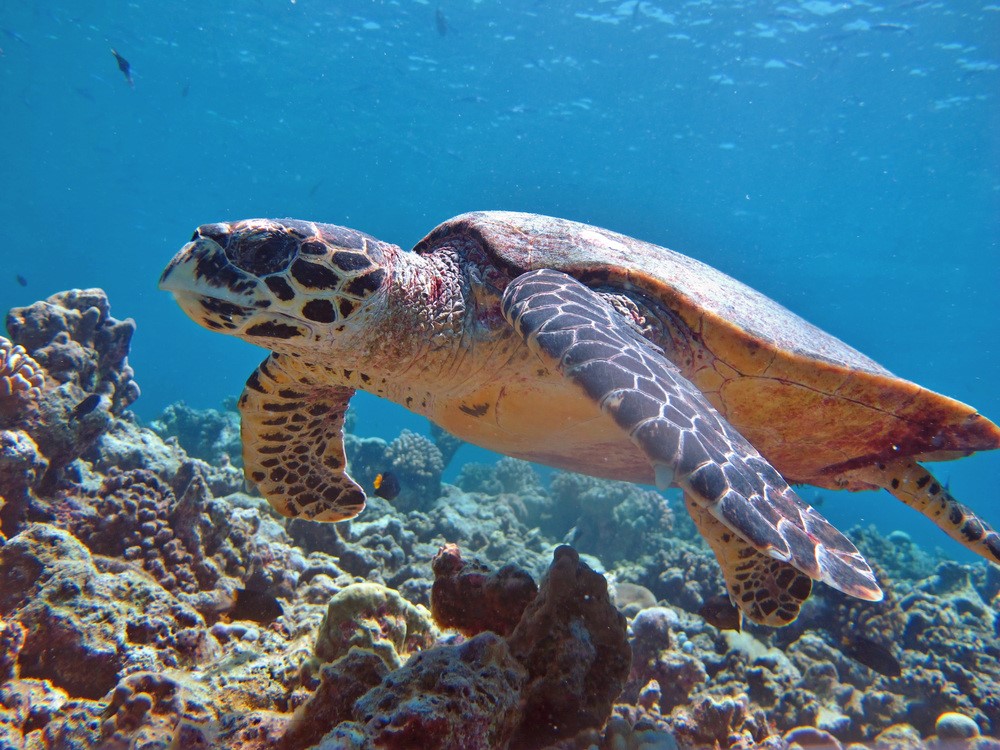 Hawksbill turtles are one of the most overexploited species of sea turtles in the world. Their shell and meat are still highly sought after among a group of people despite the existing ban on fishing or hunting these animals. Photo: MDC SeaMarc Maldives on Wikimedia Commons / CC BY-SA 4.0

The variety of shades of brown on the same piece and the beauty of tortoiseshell products —glass frames, fans, combs, mirrors, powder boxes, jewelry boxes, earrings— attracted the attention of traders and consumers and turned them into luxury items at a certain point.

The marketing and consumption of these products made from the shell of Eretmochelys imbricata or hawksbill turtles, classified as critically endangered by the International Union for Conservation of Nature, are now prohibited.

One of the most important conservation sites for this genus in Colombia is the Gorgona National Natural Park (PNNG). For more than fourteen years, information was collected there and was used by Mariana Cañas Uribe to develop the research project Somatic Growth Rates of Hawksbill Turtles, Eretmochelys imbricata, in the PNNG between 2004 and 2018. Mariana is a biologist who graduated from Universidad de Antioquia and carried out the project under the advice of Vivian Patricia Páez, professor at the Institute of Biology.

"Colombian law says that, when a species reaches this point, it must be protected. It cannot be fished, hunted or taken out of its habitat. The Gorgona Park is in charge of guarding the ecosystem where these families are living, which is the corals", said researcher Cañas Uribe about the hawksbill turtles.

June 16 marks World Sea Turtle Day, an event to raise awareness about one of the longest-lived and most endangered animals that have inhabited the Earth since the age of dinosaurs some 200 million years ago. It also provides an opportunity to call attention to the protection of hawksbills, an action that, at least in Colombia, is only implemented in theory. "It is true that, for several decades, there has been legislation that protects them, but they are still being exploited in many places, especially the hawksbill turtle, which is widely used for its shell to make a large number of artifacts", said the scientist.

The research by UdeA’s graduate is the first analysis of the growth rates and body condition of hawksbills and how they compare with turtles of other sites in the world where this type of research has been carried out.

The study identified that these individuals take a long time to grow, and it takes them between 30 and 35 years to reach the age of sexual maturity and be able to reproduce. This makes them much more vulnerable as a species because their environment changes much faster and they are unable to adapt.

Another important fact is the survival rate, which is 50%. This is not very high. It could be said that this percentage is normal because, during their stay in Gorgona, they are immature and small individuals, which makes them vulnerable to other predators or death from disease. As they get older, their survival rate increases because they have other characteristics that make them survive.

In fact, in Gorgona, there are other species of turtles. Some, such as green turtles, pass through, and others go to nest, but the Eretmochelys imbricata are not passing through or nesting, they are juvenile or immature individuals that grow on the island. Once they reach sexual maturity, they migrate to other areas outside the park.

According to Professor Páez, most research on turtles in Colombia is based on the portion of the life cycle that can be studied. It is subject to the clutches —clusters of eggs— that these animals lay on the beaches, which makes them easier to recognize.

"For pragmatic reasons, it is easier to find the nests than to dive in the middle of the ocean to capture larger animals. Most of the studies, which are not many, are always on eggs, hatchlings or females they find on beaches when they are laying the eggs. There were not even such studies on hawksbill turtles", she said.

In Colombia, the capture and marketing of this species are prohibited. In addition, this species has naturally or organically made a refuge for its youngest individuals and a place of protection and survival in the vicinity of the PNNG. 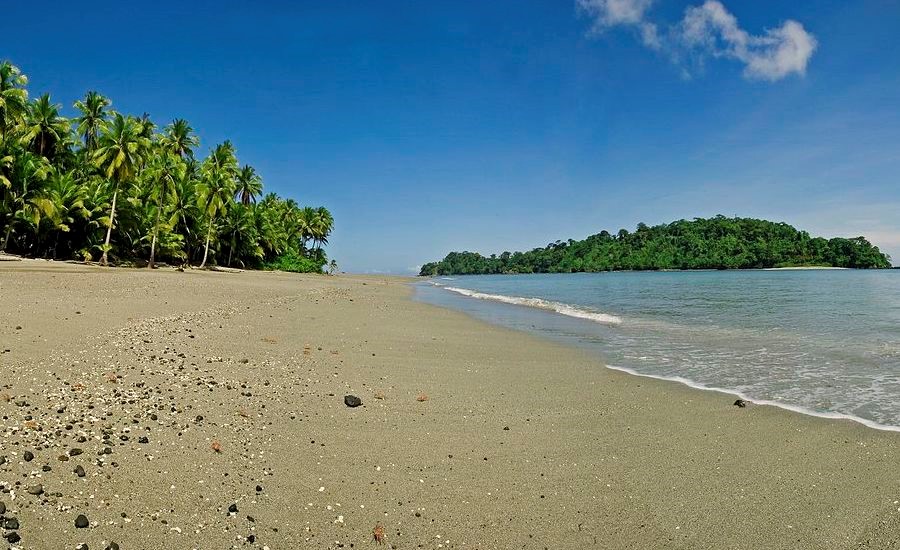 Gorgona Natural Park is a place that provides refuge for many species, including hawksbill turtles. Photo: AVIATUR on Wikimedia Commons / CC BY-SA 3.0

All species play an important role in an ecological cycle, and the extinction of a single species is a tragedy. The hawksbill turtle plays a particular role in the food cycle of corals, an important and vulnerable ecosystem inhabited by algae and fish, among others. Turtles control this environment, which prevents overpopulation.

"Taking care of corals is a vital function because they are very important not only as a food bank but also as a physical barrier to break the waves and prevent the beaches from deteriorating. In addition, they are a nursery for many large and small species", held the researcher.

The turtles are like the gardeners of the corals. They prune and organize them, so they function perfectly and allow the coexistence of the great variety of species that live there, concluded Professor Vivian.

Another important contribution made by hawksbill turtles, like all sea turtles, is that the biomass of the eggs that nest on beaches is part of the nutrient cycle of the terrestrial ecosystem. Calcium and organic material help vertebrates and invertebrates, which feed on this resource, to survive. They also help to recycle food in water and on land.