Adolescent Women at Nutritional Risk in Communes 1, 3 and 8 of Medellín

A study led by Universidad de Antioquia found that adolescent women in three poor neighborhoods of the city had serious nutritional deficiencies that could even affect their reproductive cycle. Here is what it is all about. 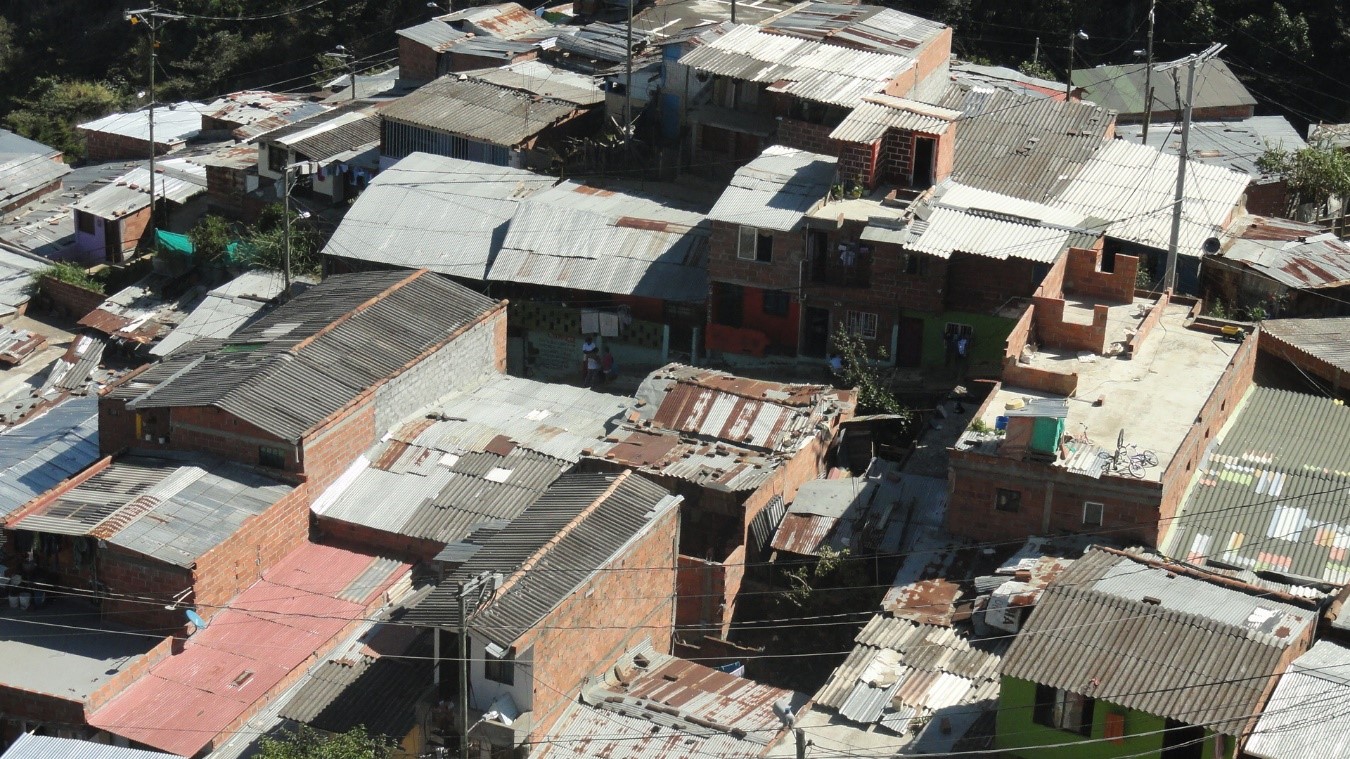 Communes 1, 3 and 8, where the research was carried out, are territories with unfavorable socioeconomic conditions. The photo shows the landscape of Commune 1. Photo: Mayor's Office of Medellín.

The Food and Human Nutrition Research Group, attached to Universidad de Antioquia’s School of Nutrition and Dietetics, led the research "Food consumption in adolescent women in Medellin", which shows worrying results concerning the diet of this study group. Some of the "hunger figures", in the words of Sandra Lucía Restrepo Mesa, coordinator of the group, show that one-third of the population that participated in the study has a protein deficit, and 98% has a calcium deficiency.

This study was conducted to assess health risks and promote the proper development of women during this specific stage. It was supported by the New York Academy of Sciences, an independent American organization with more than 25,000 members in 140 countries, in collaboration with researchers from other organizations such as World Vision and the International Center of Education and Human Development Foundation. The study was funded by the Fondation Botnar.

A total of 1,010 women aged between 13 and 19 from Medellin's communes 1, 3 and 8 participated in this study. These are poor neighborhoods in the city. According to the Administrative Department of Planning of the Mayor's Office of Medellin, 72% of the households belong to the lower-middle class. In addition, the municipality made progress in these areas in the implementation of the Public Policy for the Protection and Comprehensive Care of Children and Adolescents, an agreement for the comprehensive development, recognition and empowerment of children and adolescents as subjects of rights and political subjects in the urban and rural areas city.

The Food and Human Nutrition Research Group, which has a research line of dietary intake evaluation, has the methods, instruments and software required to evaluate the diet of populations. They are the only ones in the country that carry out this type of research. They have developed national and local studies such as food profiles in Medellin, Antioquia and 29 indigenous peoples in the country.

"Based on this research, we found that there is a risk of deficiency —the food required for good health is not supplied— in the consumption of micronutrients, which was abruptly marked by the pandemic", explained Professor Restrepo Mesa. During adolescence, the balance of macro and micronutrients is essential because of the high nutritional requirements. According to the researcher, the pandemic increased the risk because of its consequences on household economy.

The report showed the nutritional deficiencies (see chart) that this type of population has and are part of the problem exposed. To name a few, one-third of the women have protein deficit, which leads to loss of muscle mass and weak hair and nails. In turn, 52% do not reach the amount of food that provides the energy that the body’s cells need for correct functioning.

Other figures show that 91% of the women consume more saturated fat than they need, which increases LDL cholesterol. Thus, the risk of heart disease or stroke is heightened. Similarly, 63% eat more sugar than they need in a day, which increases the risk of chronic diseases, such as type 2 diabetes and heart disease. As for minerals, 98% are deficient in calcium; 64%, in iron; and 78.8%, in vitamin B9. All these are essential for proper cellular functioning, growth and normal development.

In general, the study explains that these women’s diet is unbalanced because of poor food choices. On the one hand, there is more consumption of cereals, eggs, legumes, and fast and fried food, while the intake of vegetables, dairy products and fruit is very low.

An important point for those responsible for the research was equity in access to food. In most cases, there were difficulties: 37.8% of the families did not have anything to eat at least one of the last 30 days before the visit by project researchers. In 18.2% of those households, one member went to bed hungry and, in 9%, one member did not eat anything for a day and a night during that time.

The problem not only touches people's pockets. It was shown that there are cultural patterns that aggravate the diet. "Lack of education, customs and culinary traditions limit the consumption of some food groups. It is necessary to work with the community to teach them to eat other foods that we do not consume or do not know how to prepare and help solve many problems regarding nutrition and benefit health".

This table shows the characterization of the women who participated in the research. An important fact is that 86% of them belong to the lowest socio-economic level, according to the area where they live. Illustration: Carolina Gomes.

In the 30 days before the women participated in this research, in 9% of these households, a member of the family spent the whole day and night without eating, and 37.8% of these families had nothing to eat at some point during those days. Illustration: Carolina Gomes.

Understanding the importance of how adolescent females in a population are being nourished makes it possible to anticipate the health problems of future generations.

"Adolescence is the second window of opportunity, after the first 1,000 days of life, to improve nutritional risks and inadequate growth. It is an indispensable group to break the cycle of intergenerational malnutrition", explained Sandra Lucia Restrepo Mesa, the leader of the UdeA group.

Adolescent women are of fundamental value, as they are the first link in the reproductive cycle. Malnutrition during adolescence generates public health problems, as it has negative consequences on productivity and health in adulthood.

The nutritional status of a pregnant woman affects the fetus that is being formed because the growth of the baby is determined at this stage, explained researcher Restrepo Mesa. "This is more complicated if the woman is pregnant with a girl because her health, nutrition and height condition the health, nutrition and height of the daughter and her eggs, which means that this mother is also conditioning the health of the grandchildren".