The Atrato River Has Someone to Watch Over Its Rights

More organized communities to defend their environment, increasingly coordinated institutional work and planned actions between scientists, technicians and settlers are some of the results visible today following the ruling of the Constitutional Court from November 10, 2016, which declared the Atrato River as a subject of rights and assigns UdeA a relevant role. 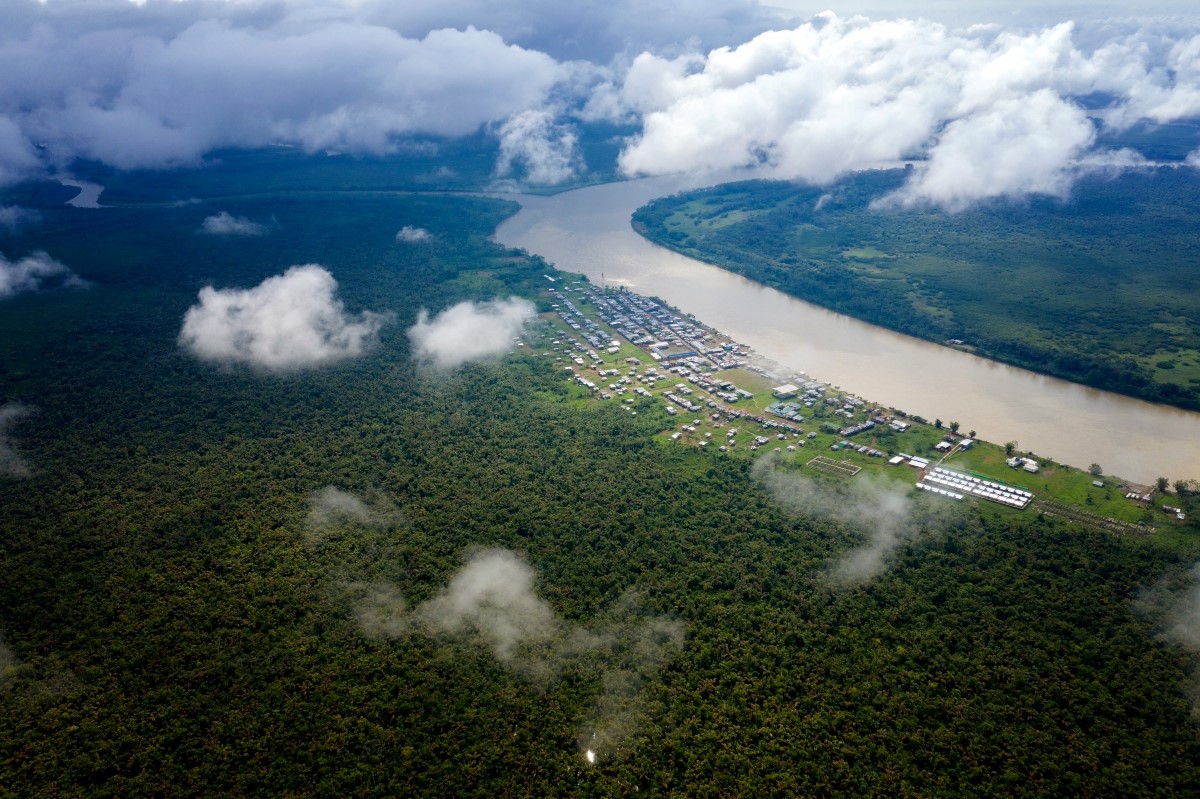 The Atrato River crosses one of the densest and most biodiverse jungles on the planet. Photo: Courtesy of image bank of Instituto de Investigaciones Ambientales del Pacífico John Von Neumann (IIAP).

Fausto Palacio García received the news on November 11, 2016. For this inhabitant of Riosucio, Chocó, who has been a member of the Association of Community Councils of Bajo Atrato (ASCOBA) for years, the fact that the Constitutional Court recognized the Atrato River and its basin and tributaries as a subject of rights implied the end of a struggle and the beginning of a new effort to make the words on paper a reality.

"The declaration of the river as a subject of rights has helped us so that these people who live on the banks of the river can have a better coexistence and a better life with it. This is leading us to protection because there used to be many damages that today are no longer being caused", said Palacio, who is also part of the Collegiate Body of Guardians of the Atrato, along with another six men and seven women, who represent the peoples who live along the river’s almost 750 kilometers, from El Carmen de Atrato to the Gulf of Urabá.

What the court did in Ruling T-622 was to protect the fundamental rights to life, health, water, food security, a healthy environment, culture and territory of the communities. By declaring the Atrato a subject of rights, the Court ordered the State and the inhabitants of the area to protect, conserve, maintain and restore it.

This is because the basin of this tributary has been greatly affected by human activities such as deforestation, contamination from illegal mining, deviation of the tributary’s course and the Colombian armed conflict, among other aspects.

The University, with Clear Responsibilities

Jairo León Zapata Martínez, director of the Environmental Academic Corporation (CAA) of Universidad de Antioquia, recalled that, in 2014, some of the community organizations were seeking protection for the area, and they managed to get the Constitutional Court to start studying the case with the help of the NGO Tierra Digna.

"The Court requested different kinds of concepts from official and scientific entities, including UdeA’s Institute of Biology and Department of Anthropology. After analyzing those reports, the Court issued the ruling and designated 20 state institutions for enforcing some specific points of the ruling", said Zapata.

This executive is also the secretary of UdeA’s commission for support, advice and accompaniment of the ruling, which includes, in addition to the CAA, the faculties of exact and natural sciences, social and human sciences, law and political sciences, engineering, national public health, education, the Institute of Regional Studies (INER) and the Office for Regionalization, with the coordination of the Vice Rector's Office for Outreach.

This group was formed to respond adequately to the Court's orders that involve the university, including the preparation of a plan to decontaminate the Atrato river basin and its tributaries, in which the Humboldt Institute, the University of Cartagena, the Pacific Environmental Research Institute and WWF Colombia, among others, also participate.

"We have had the action plan with short-, medium- and long-term goals since 2020 in a road map that we worked out with INER", stated Zapata, who recalled that UdeA is also part of the advisory team of the river guardians, and the CAA carries out continuous environmental education courses with the communities.

Similarly, Universidad de Antioquia supports the preparation of reports within the follow-up committee and is also part of the panel of experts that advises on the process of executing the ruling together with members of the community. "We review documents, generate institutional technical concepts and respond to the reports of the Comptroller General's Office and the follow-up committee", said Jairo Zapata. 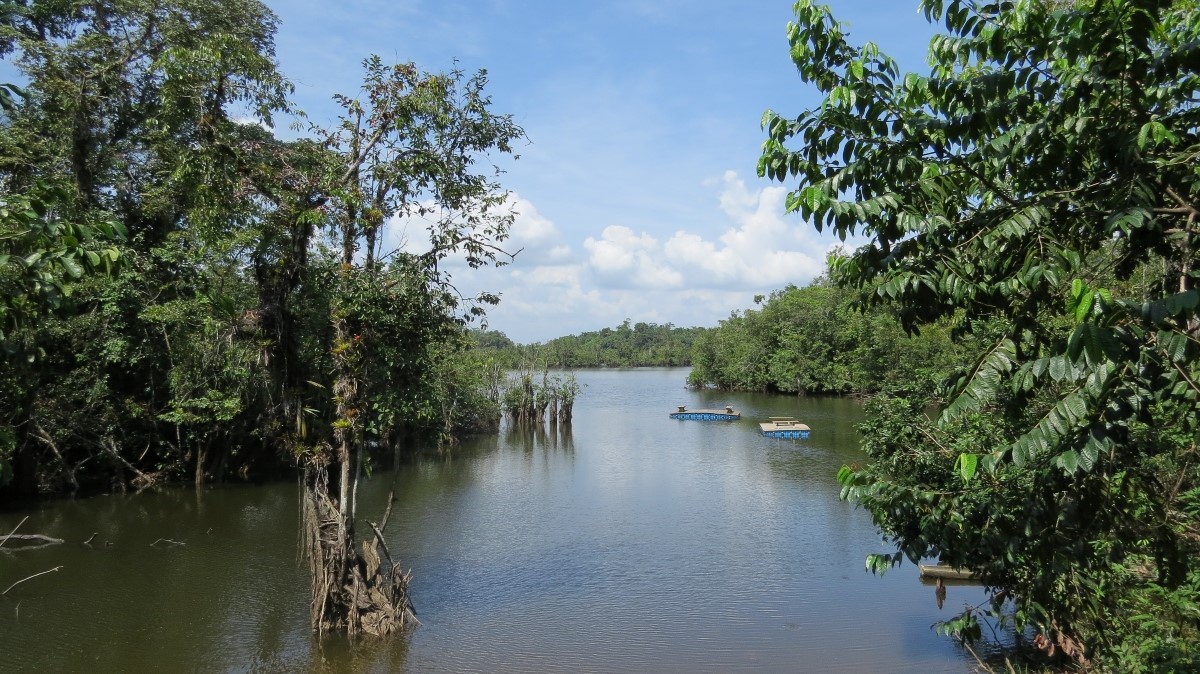 The Atrato flows into the Caribbean Sea through seven mouths between the municipalities of Turbo, in Antioquia, and Unguía, in Chocó. Photo: Courtesy of image bank of Instituto de Investigaciones Ambientales del Pacífico John Von Neumann (IIAP).

View from the Territories

For Nixon Chamorro, from the Embera Dobidá community of Alto Baudó and guardian that represents the Dialog Roundtable of the Indigenous Peoples of Chocó, greater awareness about this river must be raised in Antioquia. It is the largest river in Colombia by volume and one of the most abundant in terms of water flow in the world, located in the most biodiverse region of the planet.

Chamorro added that "UdeA is expected to play a leading role in the implementation of these action plans, either by lobbying the national government or the ministries that have to do with the ruling or by using its strengths and all its knowledge and logistical capacity, as well as its scientific and technical personnel".

Nixon welcomes the fact that the indigenous, Afro and farmer communities that live in the river basin are increasingly being considered for the recovery of the entire area targeted by the ruling. He believes that, although slowly, progress is being made in compliance.

Marcela Sánchez Sánchez is of a similiar opinion. She is an inhabitant of the Guaduas village in El Carmen de Atrato and, as a guardian of the river and member of the Environmental and Social Roundtable of her municipality, is very clear about the problems of the tributary at its source and the need to comply with the Court's orders.

"We are waiting to start the implementation of the ruling because the processes of dissemination and socialization of the orders came after it. For now, we have been working on making it known. Some communities are not clear about what a ruling is, so we have to carry out a teaching process to explain what a ruling means, and what a river having rights means. It must be very understandable so that the community can make it its own", indicated the community leader.

Although she understands that the Constitutional Court covered the entire basin with its decision and there is a joint project between the communities involved and many institutions, Marcela called for "those of us in the Andean zone to not be seen as strangers. People from the mountains are in the area where the river is born, and we are also from Choco".