Good Nutrition and Aging, a Relationship of Increasing Priority

According to the World Health Organization (WHO), between 2015 and 2050, the percentage of the world's population over 60 years of age will increase from 12 to 22%. In addition, by mid-century, 80% of the elderly will live in low- and middle-income countries, so the issue of healthy nutrition in this population remains valid. 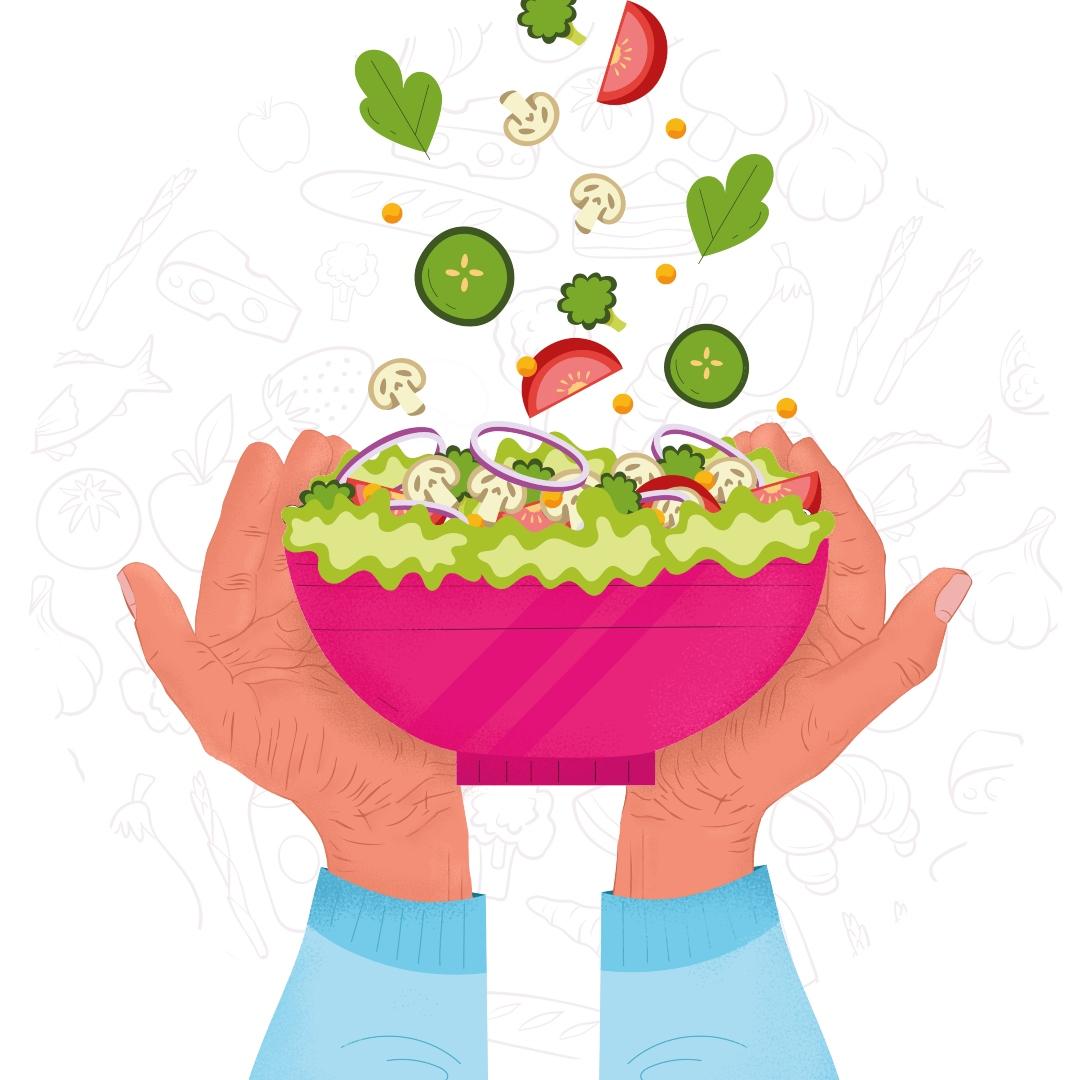 While a newborn child may require about 110 calories per kilogram daily, an elderly person may require less than 30. Illustration Carolina Gomes.

Adults over the age of 60 will number more than 2,000 million worldwide by 2050, according to WHO. Along with physical activity, good nutrition is associated with a healthy old age, as it can help prevent diseases such as heart disease, diabetes, cardiovascular disease and certain types of cancer.

"If we do not eat healthily, many aging processes will accelerate and will often be accompanied by chronic diseases", explained Gloria Cecilia Deossa Restrepo, teacher at the School of Nutrition and Dietetics of Universidad de Antioquia.

She commented that, at this stage of life, certain nutritional considerations must be taken into account since nutritional requirements change. Elderly people have difficulty with the absorption of some nutrients. Their organism does not have the same speed of protein synthesis and needs fewer calories, the teacher indicated.

A newborn child may require about 110 calories per kilogram per day to maintain their nutritional status, while an elderly adult may require less than 30. As people grow older, there is a differentiated demand for energy, and adults spend less of it than young people and children. "Every day, the body needs a daily dose of vitamins, minerals and macronutrients to function. If it does not have them, the aging processes can accelerate", she said.

WHO’s World Report on Ageing and Health (2015) is a document that aims to serve as the basis for the promotion of healthy aging in the world. According to it, apart from physiological changes, the arrival of adulthood may be accompanied by psychosocial changes such as isolation, loneliness and depression, which can have significant effects on diet. Therefore, nutritionist and dietitian Ángela Franco recommended that, as far as possible, elderly adults be accompanied at mealtimes. Franco is the leader of the Promotion and Prevention Unit of UdeA’s School of Nutrition and Dietetics Extension program.

She pointed out that, sometimes, due to physical impossibility, the elderly can limit the variety of foods such as meat in their diet, "because they are too lazy to chew, or their teeth are no longer in good condition", explained Franco. This will end up affecting their nutritional balance.

There are also natural deficiencies in this population. The most recent dietary and nutritional profile of Antioquia indicates that 50% of elderly adults were deficient in vitamin D and iron. According to Deossa Restrepo, this is also problematic because the reserves are not always sufficient for the daily requirements of the organism.

Both the dietary and nutritional profile of Antioquia (2019) and that of Medellín (2015) coincide in that the older people get, the greater the loss of muscle mass, the greater the limitations in walking and, on some occasions, the greater the consumption of calories in the form of carbohydrates, which are transformed into sugar molecules.

"Especially in the age group of 60-70, there is more obesity than underweight. This excess increases the risk of hypertension, cardiovascular disease, diabetes and musculoskeletal problems", said Deossa Retrepo, researcher at the School of Nutrition and Dietetics, which was in charge of both profiles in partnership with the Government of Antioquia and the Mayor's Office of Medellin, respectively.

For a Healthy Diet

Dr. Angela Franco shared some nutritional recommendations for adults over 60, their families and caregivers:

Since many people reach adulthood with dental problems, Franco recommended serving soft meat and vegetables, either in chunks or ground. Given the loss of taste that some people suffer from —which is why some adults begin to prefer very sweet or very salty foods— she indicated that fresh herbs can be used for seasoning.

To facilitate adequate nutritional support for this population, the school is currently developing a virtual diploma course on nutrition and aging, offered in partnership between Universidad de Antioquia and the Ibero-American Nutrition Foundation (FINUT).