UdeA was commissioned for Colombia by the Accessible Books Consortium, a platform for the visually impaired population that integrates 500,000 titles, in more than 70 languages, in electronic text, audiobook, macro type and Braille formats. To this end, the institution recently signed an agreement with the World Intellectual Property Organization (WIPO). 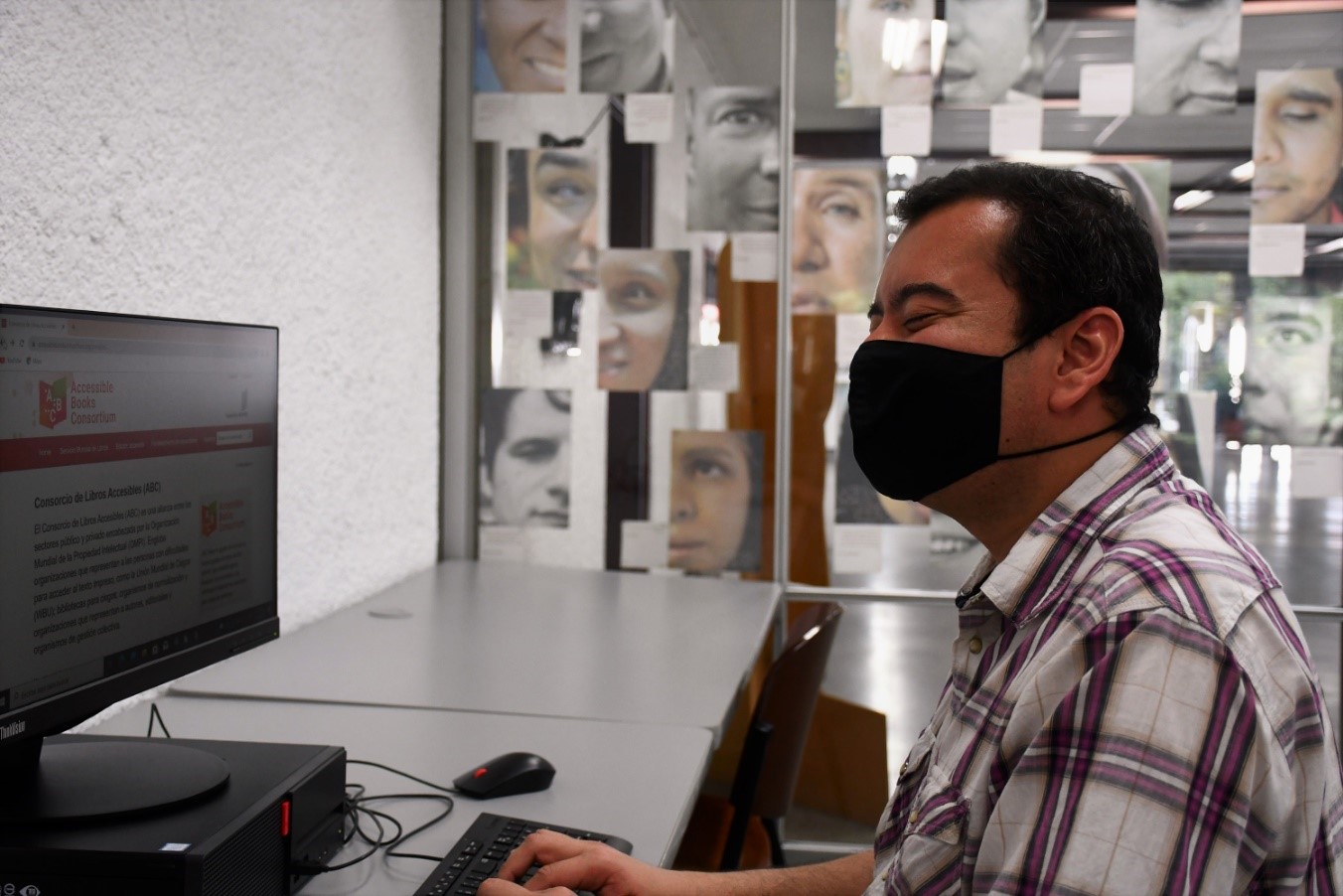 According to the World Health Organization, less than 10% of the visually impaired population has access to formal education in Latin America. Photo: courtesy Marcela Jaramillo.

In its quest to consolidate itself as an institution committed to inclusion and diversity, Universidad de Antioquia signed an agreement with the World Intellectual Property Organization (OMPI) to be the holder and administrator of the Accessible Books Consortium in Colombia. The agreement will benefit the country's visually impaired population.

This online catalog allows books to be exchanged between partner libraries without the need to request permission from the rights holder. "This is a collection of 500,000 titles in more than 70 languages in electronic text, audiobook, macro type and Braille formats, which will be managed by UdeA’s Carlos Gaviria Díaz Library for people all over Colombia to enjoy and approach knowledge", said Laura Marcela Jaramillo, coordinator of the Information Service for the Visually Impaired, which is part of Universidad de Antioquia’s Library System.

According to WIPO, the university was selected for this mission because of the experience it has gained since 1996 thanks to its programs for the inclusion of the blind and low vision population, the construction of its own repository and the Colombian government's ratification of the Marrakesh Treaty. This treaty, which was implemented on June 27, 2013, in Morocco, created a set of measures for the benefit of people who are blind, visually impaired or have difficulty accessing printed texts.

Electronic text: It has a screen reader so that the person can listen to the content at their own pace and go back to the sections they need.

Audiobook: The content of the text is recorded in its entirety to be listened to.

Macro type: These are texts that come in large print formats so that they can be read by those with low visibility.

Braille: In the digital repositories, some texts have the quality of being printed in Braille for blind people. This material includes a large catalog of musical scores.

Overseeing this catalog in Colombia will allow Universidad de Antioquia to establish strategic alliances with national and international entities and continue producing accessible texts since, according to figures from the World Health Organization (WHO), only 10% of the material produced by commercial publishers can be used independently by those with low visibility or who are blind.

"The agreement includes advice to UdeA by WIPO to teach the community how to access the consortium's material, generate new content and train publishers on the subject", noted Marcela Jaramillo.

Since 1996, the university has been working to eliminate barriers so that the blind or low-visibility population can access undergraduate and graduate programs, as well as bibliographic material related to their academic training or interests as readers. "That year, the Information Service for the Visually Impaired was born. It has become a model at the national level, and it advises different institutions throughout the country", said Jaramillo.

This work has become a decisive factor in making Universidad de Antioquia the first choice in Colombia for visually impaired students who aspire to undergraduate and graduate studies, said the director of the service. To this end, strategies such as the Jorge Luis Borges Room, in the Carlos Gaviria Díaz Library, and the Tiresias repository, which has more than 3,700 accessible academic texts, have been implemented.

These two alternatives, which evoke the Argentine writer and the soothsayer of Thebes, are part of the set of actions that make UdeA project itself as an inclusive institution that offers both physical and virtual spaces to access bibliography that was previously only available to the sighted population.

The World Health Organization estimates that 285 million people worldwide are visually impaired and that less than 10% of them have access to formal education.

The international organization also points out that, in North America and Europe, employment of blind people is approximately 25%. However, in Latin America, this figure is below 10%.

The World Blind Union estimates that only 10% of everything that is published in the world is accessible to the visually impaired, and this percentage is lower in developing countries.