The Ocean’s Skin is Studied in the Gulf of Urabá

Members of the Ocean, Climate and Environment Group of the Urabá Branch are researching the dynamics of the microlayer: a mantle that regulates the interactions between the sea and the atmosphere. 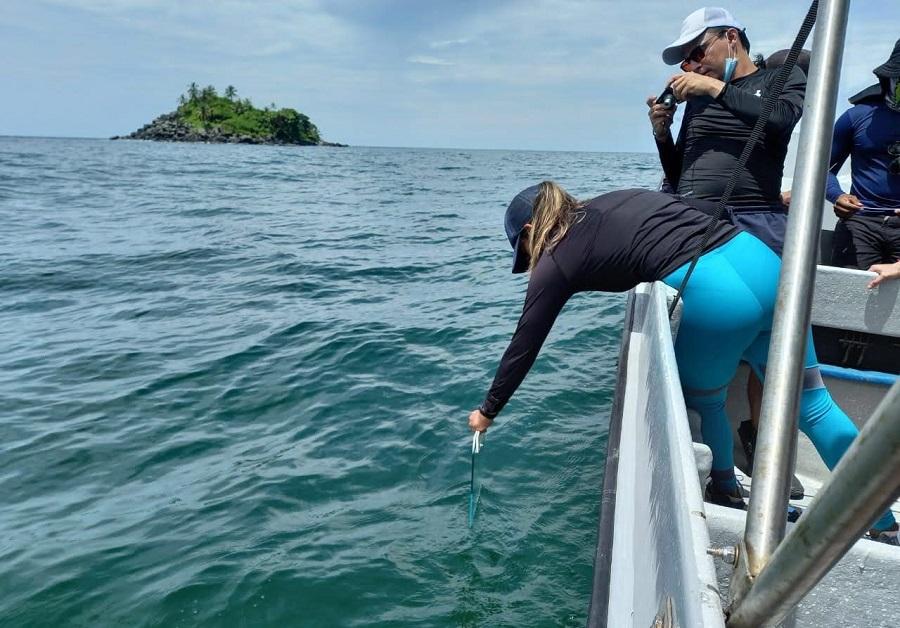 Throughout the entire marine expanse of the Earth, there is a very thin, almost invisible surface layer, about the thickness of a hair, called the microlayer. It is an interface that regulates the Earth's biogeochemical cycles and determines the exchange of climate-relevant gases such as carbon dioxide, methane and nitrous oxide.

Knowing and investigating this layer is fundamental in the field of climate studies since it regulates all the gas exchanges that take place between the ocean and the atmosphere as if it were a lung in oceanic dimensions. Exploring its characteristics can provide clues as to how carbon dioxide is controlled on a global scale and contribute to the analysis of the planet’s climate.

Everything that passes from the ocean to the atmosphere and from the atmosphere to the ocean has to pass through this superficial 1-millimeter-thick layer, which is why it is very important to research it in detail, said Mariana Ribas Ribas, a chemical oceanographer from the University of Oldenburg, Germany. She has advised the members of the Ocean, Climate and Environment Group, attached to the Academic Environmental Corporation, an academic unit of UdeA, on the study of this mantle, especially on the coast of Antioquia’s Urabá.

Through sampling methods and oceanographic instrumentation, since 2009, the research team has been observing the biological processes that occur there: bacterial communities and the exchange of nutrients and organic matter. All this is related to the biogeochemical cycles of the Earth.

"It is an oblique layer that is in the entire ocean and works as a piece of sticky tape or barrier that reduces the speed of exchanges between the sea and the atmosphere daily. The Gulf of Urabá is unique in that it has a high concentration of surfactants, which could reduce the speed of transfer of CO2 and other greenhouse gases", detailed Lennin Flórez Leiva, teacher, researcher and leader of the project at the UdeA Marine Sciences campus, located in the municipality of Turbo.

Microlayers are formed by organic production and control many of the exchanges between the ocean and the atmosphere. In relation to surfactants, researcher Flórez Leiva indicated that "they are substances or chemical agents in a tiny surface layer, but they can be much thicker than other layers studied, and their functioning is similar to that of water in oil. It is like a lipid layer that can rise to the surface".

Fundamental to the Ecosystem 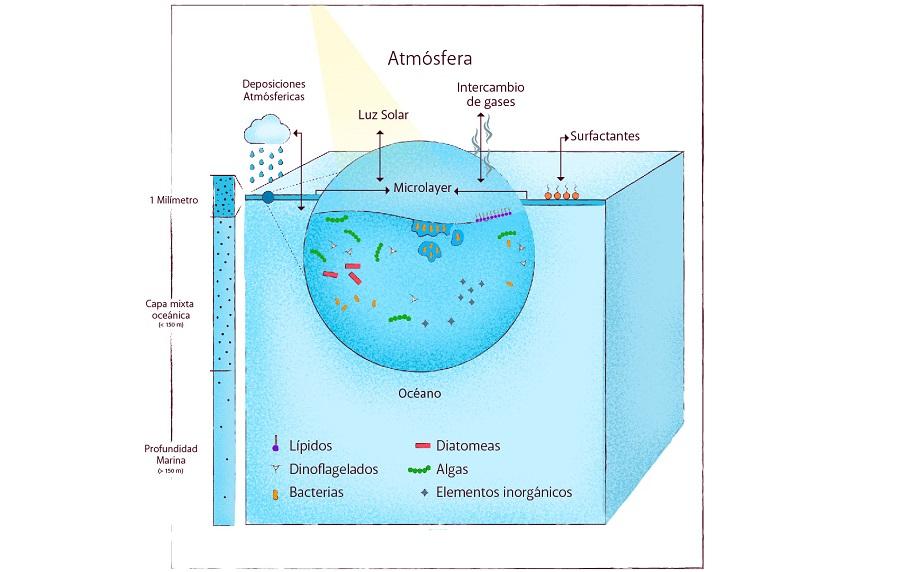 Three-dimensional illustration detailing the microbial communities involved in interactions with microlayers, decisive in the global carbon cycle. By: Carolina Gomes.

Because of its estuarine geographic condition, which is the result of the freshwater from the Atrato River with the seawater that also drains the biogeographic Chocó basin (the rainiest tropical region on the planet), and because of the matter provided by rivers and mangroves, the Gulf of Urabá is a fundamental place to study the relationship of this layer with the planet's climate.

Since 2014, microlayers have been studied in places such as Germany, Malaysia, Singapore, Australia and Norway. From their perspective, the recognition of the dynamics that these have in the Gulf of Urabá is a very relevant fact for science since they have been scarcely studied in North America, and there are no reports from Latin America. In the case of Colombia, it is the first time they are studied.

Karen Moreno Polo and Diomer Tobón Monsalve, Oceanography students and researchers of the project and of the Ocean Climate and Environment group (OCA) added that they are joining efforts to understand this layer, so they hope that this study will be a precursor of other research that will expand the knowledge about microlayers in the gulf and other tropical estuaries.

The sea is the planet's major carbon sink and source, and surfactants prevent it from absorbing carbon emissions. The study of this microlayer provides insights into how these emissions could be reduced on a global scale.