The victims of the internal armed conflict in Colombia found mechanisms to make their situation visible and demand justice in art. Individual experiences and collective memory converge on the stage as an alternative cultural narrative to demand truth, reparation and non-repetition. 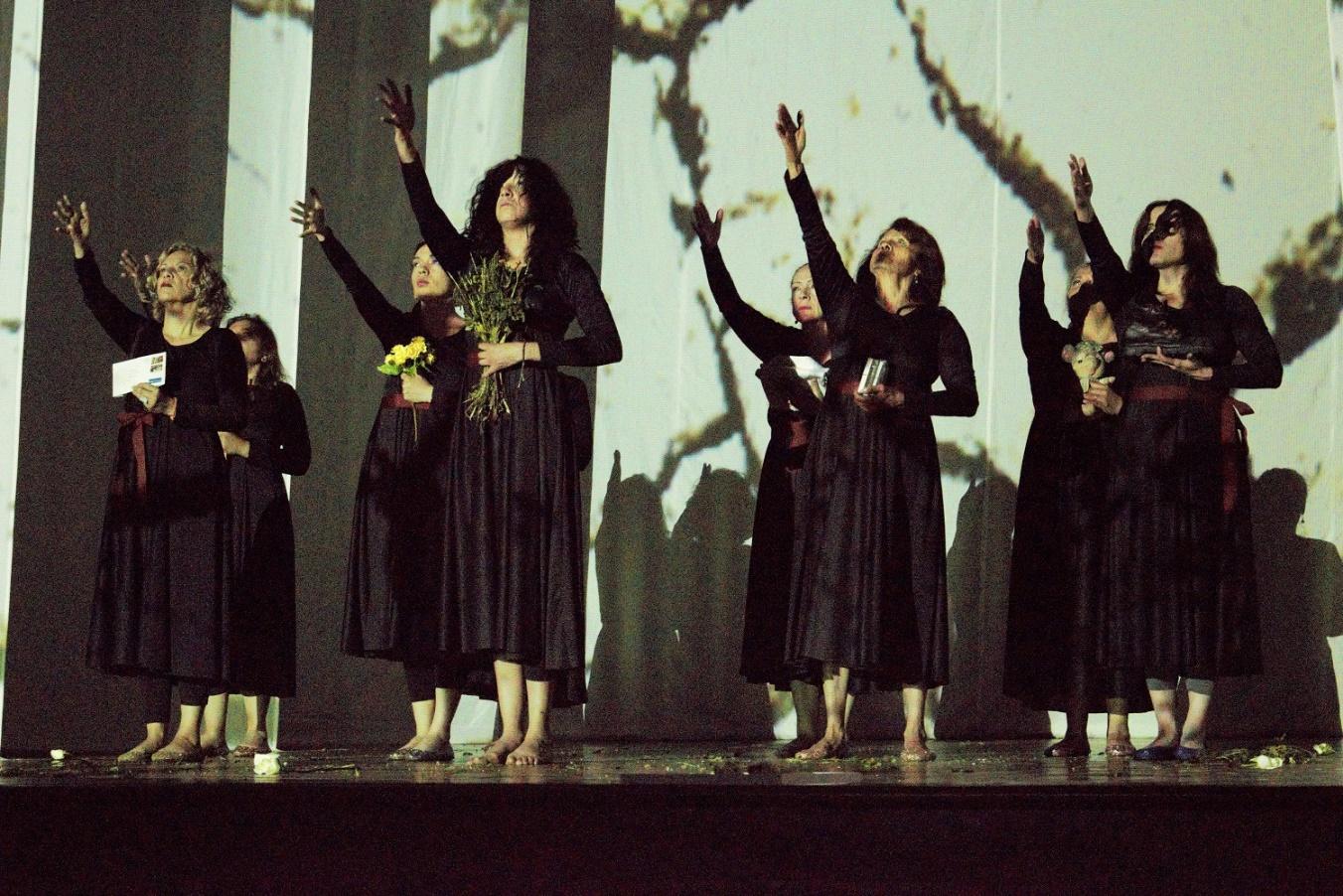 Theater has taken on a meaning beyond art: a tool to tell the history of the country from the voice of the victims. Staging Antígonas, Tribunal de Mujeres. Photographs Courtesy: Leandro Quiroz.

With these lines begins Antígonas, Tribunal de Mujeres (Antigones, Women's Court), a play based on the rawness of real events as a result of state violence and crimes committed by the Armed Forces in the context of Colombia's internal armed conflict: illegal interceptions, persecution, disappearances, kidnappings and murders. It was born from the truth, the experiences, the pain and the collective construction of women victims who still seek justice amidst the silence and inaction of the perpetrators.

Personal stories are the common thread of this opera that cries out and claims in a single voice. The stories that converge in the opera are the "false positives" —deaths of Colombian civilians illegitimately presented by the state as casualties in combat— the 29-year harassment and political genocide of members of the Unión Patriótica (UP) party, the persecution of students with fabricated judicial processes called "judicial facades" and the illegal espionage operation by the now defunct Administrative Department of Security (DAS) against various social actors, including human rights defenders. 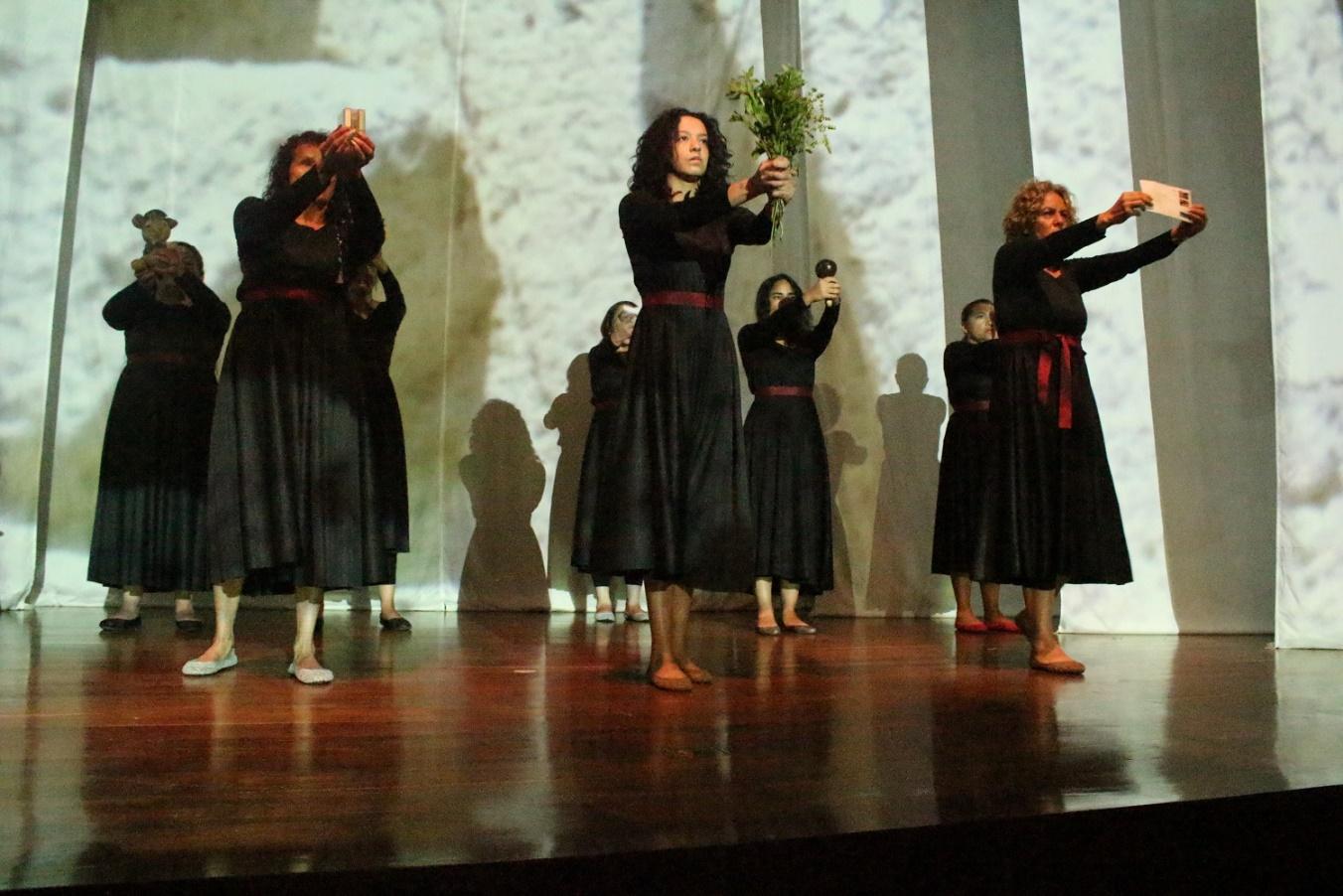 The collective construction of memory through art is a cultural expression that arises in the social context of the country.

This play reflects how theater has taken on a meaning beyond art in Colombia: a tool to tell the country's history and fight against impunity, oblivion and lack of reparations. The stage is the place where justice is demanded, and the audience is the court to which the stories are told.

In the case of Antígonas, it is the result of a theatrical laboratory conducted by the Tramaluna Teatro group of Colombian Theater Corporation, directed by Carlos Satizábal, with three professional actresses and victims of the armed conflict, who became the natural protagonists of their own story.

"It represents theater as a cultural narrative. Women go on stage to make visible and challenge the media's version of their stories related to state violence. It was built because the media doors were closed to them by a mandate of the national government of the time. As a result, Patricia Ariza, director of La Candelaria Theater and the Corporation, called them to show them another way to make their cases visible", said Leandro Quiroz, author of the book El dolor en escena (The Pain on Stage), published in December 2021 by the Universidad de Antioquia publishing house. It is the result of a project of anthropological research on collective creation as a memory of the Colombian armed conflict inspired by the play Antígonas.

The book gathers in detail the testimonies of the seven women who went from "individual victims to a theatrical collective for dignity": Luz Marina Bernal, María Sanabria and Lucero Carmona, mothers of Soacha; Orceny Montañez and Fanny Palacios, members of the UP; Mayra López Severiche, victim of a judicial facade, and Soraya Gutiérrez, victim of the DAS interceptions. They found an input for joint theatrical construction in reality.

In El dolor en escena, the author argues that this collective construction is a "kinder" way of understanding what has happened in the country. Likewise, this type of creations become part of the Colombian dramatic art that emerged 50 years ago with the La Candelaria Theater and the Experimental Theater of Cali as precursors. This type of theater has no established parameters, and the research process becomes a theatrical narrative that can be taken to the stage.

"Artists can use these narratives to begin to weave social fabric and build memory. The focus is the construction of individual and social memory that concerns all Colombians because, directly or indirectly, we have suffered the armed conflict from different perspectives, and collective memory because it is the possibility that they have to unite and speak louder by joining their voices".