By: Yakeel Quiroz and Diego Sepulveda-Falla / Neurosciences Group of Antioquia
Aliria Rosa Piedrahíta, the Paisa who carried the Alzheimer's gene in her biology because of her family history, and another mutated gene that protected her for almost 30 years from this disease, donated her brain to research. Her case is providing insights into the pathobiology of Alzheimer's dementia and possible ways to prevent or treat it. In a recent publication of the journal Acta Neuropathologica, in which UdeA researchers participated, details of his case are presented. 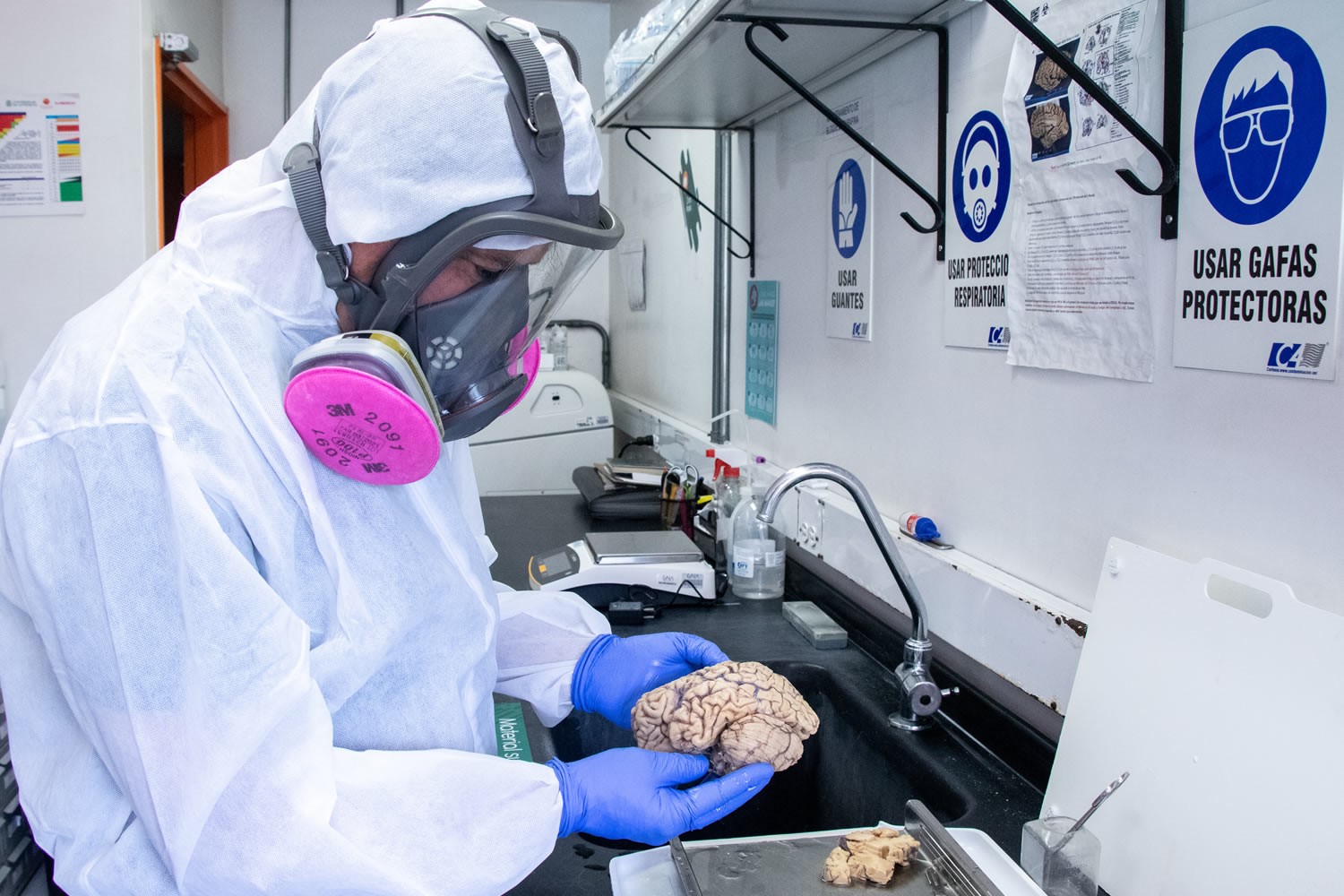 The Neurosciences Group of Antioquia, attached to the Faculty of Medicine of Universidad de Antioquia, will try to replicate what nature did in Aliria's brain. Photo: UdeA Communications Office / Alejandra Uribe F.

The brain of Aliria, who should have developed Alzheimer's disease around the age of 44 and died at about 60, is providing important clues about resistance to dementia pathology and possible treatments for Alzheimer's disease. Aliria presented her first symptoms only at 72 and died at 77 from melanoma. Why this resistance? That question motivated researchers to study this case in depth.

The woman was protected by a mutation known as APOE3 Christchurch-APOE3ch, which preserved critical brain regions from tau pathology. That is, according to the research, specific subtypes of neurons and glia —cells that support and protect neurons in the brain— showed protective characteristics in brain areas that contained more APOE3 Christchurch and had less tau pathology.

The Neurosciences Group of Antioquia (GNA) is attached to the Faculty of Medicine of Universidad de Antioquia. It is coordinated by Dr. Francisco Lopera and has been studying the largest family in the world with a mutation for familial Alzheimer's, the PSEN1 E280A mutation, known as the "paisa mutation". Aliria was a member of this family. The Paisa mutation is autosomal dominant, which means that only one copy of the gene is needed to cause the disease. In other words, the disease-causing mutation can be easily inherited from one generation to the next. Carriers of the mutation usually develop symptoms of Alzheimer's in their 40s or 50s and die in their late 50s or early 60s. However, Aliria did not start showing signs of Alzheimer's until her early 70s and died in 2020 at age 77, a surprising finding because the APOE3ch variant she had turned out to be strongly protective.

In Alzheimer's disease, the degenerative process is characterized by the accumulation of proteins in the brain —amyloid peptide and tau protein— as well as neuronal death and brain atrophy. The GNA together with collaborators in the United States and Germany now report in the journal Acta Neuropathologica that Aliria indeed had pathological features of Alzheimer's disease in her brain, but there were brain regions that were protected against tau pathology, such as the frontal cortex, which is important for judgment and other executive functions, or the hippocampus, which is important for memory and learning.

In this case, tau pathology did not affect the frontal cortex or the hippocampus but predominantly the occipital cortex, the area of the brain at the back of the head that controls visual perception. The occipital cortex was the only major brain region that exhibited features typical of Alzheimer's disease, such as chronic inflammation of brain cells called microglia and reduced levels of APOE expression.

You may be interested in The brain that defied Alzheimer’s, published in The Harvard Gazette

"Thus, the Christchurch variant may influence the distribution of tau pathology. It modulates the age of onset, severity, progression and clinical presentation of autosomal dominant Alzheimer's disease, which suggests possible therapeutic strategies", the researchers write. "This is a pioneering case in Alzheimer's disease research and has already opened up new avenues for treatment and prevention, which we are currently pursuing with some collaborators. This work is shedding light on some of the mechanisms of resistance to Alzheimer's disease", said Yakeel T. Quiroz, PhD, associate professor at Harvard Medical School.

"This patient showed us how many competing forces —abnormal protein accumulation, inflammation, lipid metabolism, homeostatic mechanisms— promote or protect against disease progression. They begin to explain why some regions of the brain were spared, while others were not", said Justin Sanchez, co-author and researcher in Neurology at Massachusetts General Hospital (MGH).

"We rarely get pleasant surprises when studying brains with familial Alzheimer's disease. This case showed a surprisingly clear protected phenotype. I am sure that our molecular and pathological findings will at least suggest some avenues of research and raise hope for a successful treatment against this disorder", said Dr. Diego Sepulveda-Falla of the University Medical Center Hamburg-Eppendorf in Hamburg, Germany.

"This exceptional case is an experiment designed by nature that teaches us a way to prevent Alzheimer's disease: Read, learn and imitate nature", concluded Dr. Francisco Lopera, coordinator of the GNA. He pointed out that the goal is to replicate what nature did in Aliria's brain, that is, to develop a gene therapy that enables the inoculation of Aliria's protective information into the body of people at high risk of Alzheimer's, or to develop drugs that imitate the mechanism of action of the protective mutation in Aliria's brain.

The study was funded by the US National Institutes of Health (NIH), the MGH Executive Committee on Research (MGH Research Award), the Alzheimer's Association, the German Research Foundation (DFG), Universidad de Antioquia, the Werner Otto Foundation and the German Federal Ministry of Education and Research (BMBF).